PhD candidates Ibai Laña and Jesús López were Visiting Researchers at the Knowledge Engineering and Discovery Research Institute (KEDRI), one of the institutes of the Auckland University of Technology (AUT) in New Zealand, and their work is part of the AUT Artificial Intelligence Initiative. They were EACEA scholarship recipients (Erasmus Mundus-Action 2) through the Pacific Atlantic Network for Technical Higher Education and Research (PANTHER) programme, which is a common initiative of the European Union, Australian and New Zealand’s technical universities for research and education development.

Ibai’s research focused on long-term traffic estimations, proposing novel methodology that yields long-term forecasts using similarity-based clustering of daily traffic volume data, and monitors them in real time to adapt them in case of a mismatch or contingency. All of this is achieved by means of eSNN (evolving Spiking Neural Networks) techniques and a change detection and adaptation mechanism. The main contributions of this research work can be summarized as follows: 1. The implementation of an improved method to obtain traffic patterns for any location and date that can be used by ATIS and ATMS. 2. The use of eSNNs in the traffic domain and the implementation of a method to encode traffic data into spikes over the time domain that feed an eSNN. 3. The development of an online detection and adaptation mechanism that constantly evaluates and updates pattern-based forecasts, taking into consideration current traffic volume observations.
4. The proposal of a framework to effectively maintain long-term predictions with incremental short-term adaptations which can be self updated with new knowledge embedded in newly arriving data samples. 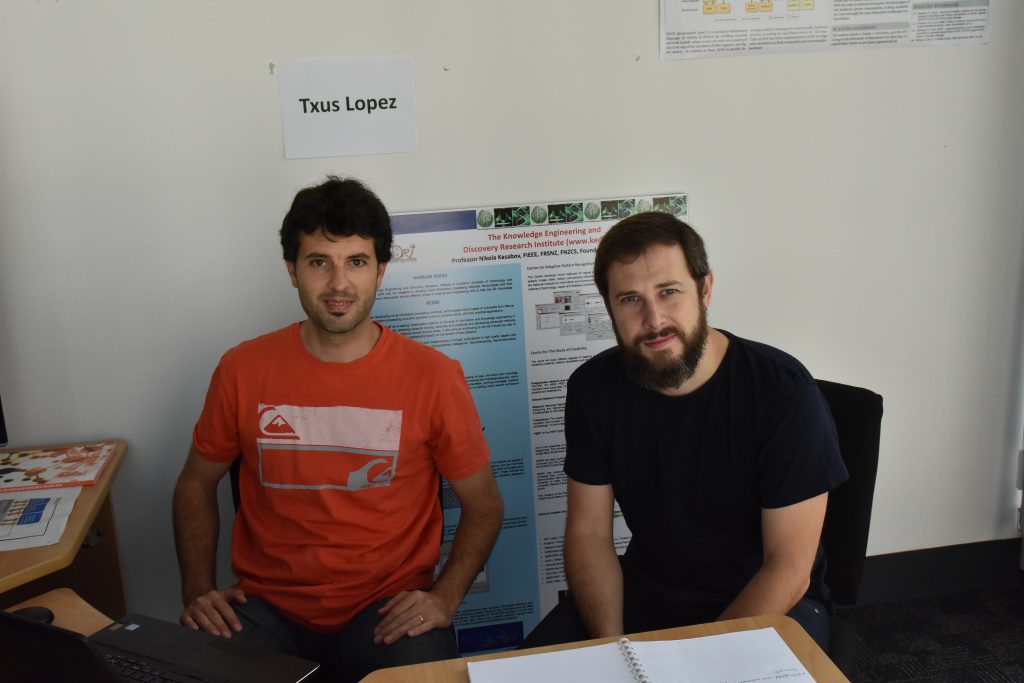 Jesús’ research focused on concept drift adaptation and detection. Regarding drift adaptation, he developed a portfolio of new adaptations for evolving Spiking Neural Networks (eSNNs) in online learning scenarios under concept drift. Firstly, he adapted the traditional eSNN technique to be used on online data streams by limiting the size of the neuron repository, yielding the so-called Online eSNN (OeSNN). Secondly, he embraced the use of selective and generative data reduction techniques (DRTs) to optimize the contents of the neuron repository so as to achieve a better adaptability of the model to changing concepts over the processed data stream. Both passive and active strategies have been defined to incorporate DRTs into the OeSNN learning procedure: the active comprises a drift detector that detects changes along the data stream and triggers the application of the DRT at hand to the neuron repository. Two different families of OeSNN models have been proposed: OeSNN-PS (using prototype-selection DRTs) and OeSNN (corr. using prototype-generation DRTs), both capable of operating in passive and active modes when processing data streams. In what refers to the drift detection research, he developed a novel drift detection technique coined as eSNN-DD, which does not rely on the performance of any base learner as opposed to other approaches from the literature utilized for drift detection. Instead, his approach exploits the structural changes (neural merges) of a eSNN predictive model to identify the drift point, hence it can be regarded as an embedded drift detection approach that stems as a byproduct of the particular learning algorithm of this class of neural networks. Contributions dealing with drift detection often build upon the hybridization of a classifier and a detection criteria. The embedded strategy suggested in this work can be useful to simplify the drift detection process in those applications with stringent computational constraints. Nevertheless, eSNN-DD can also work in collaboration with any other adaptive technique, roughly like most of the other detection approaches.

Two of our PhD candidates, Jesús L. Lobo and Ibai Laña, are going to spend the next six months…